Dutch Remembrance Day… Since the end of WWII, every May 4th at 8 p.m. the entire country of the Netherlands observes two minutes of silence to remember those who gave their lives for their freedom. The entire country, everyone stands still.

At the Netherlands American Cemetery it is observed with a simple yet impressive ceremony in which local school children are invited to participate. The national anthems of the Netherlands and Unites States are played followed by Taps. The Assistant Superintendent of the cemetery gives a brief word to those present. The flags are then lowered and folded by the children. The slideshow contains photos taken during the ceremonies of 2013 and 2014. 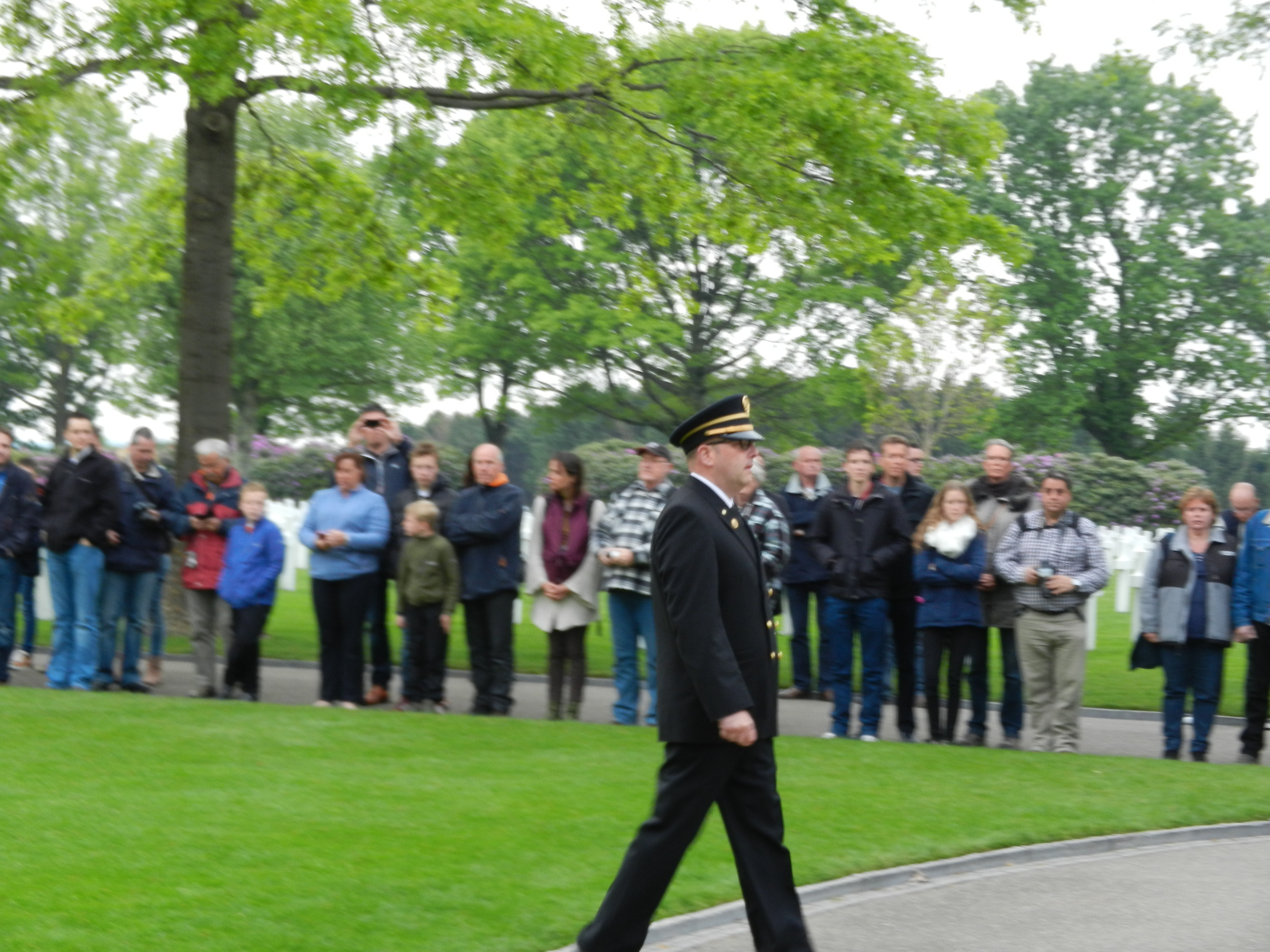 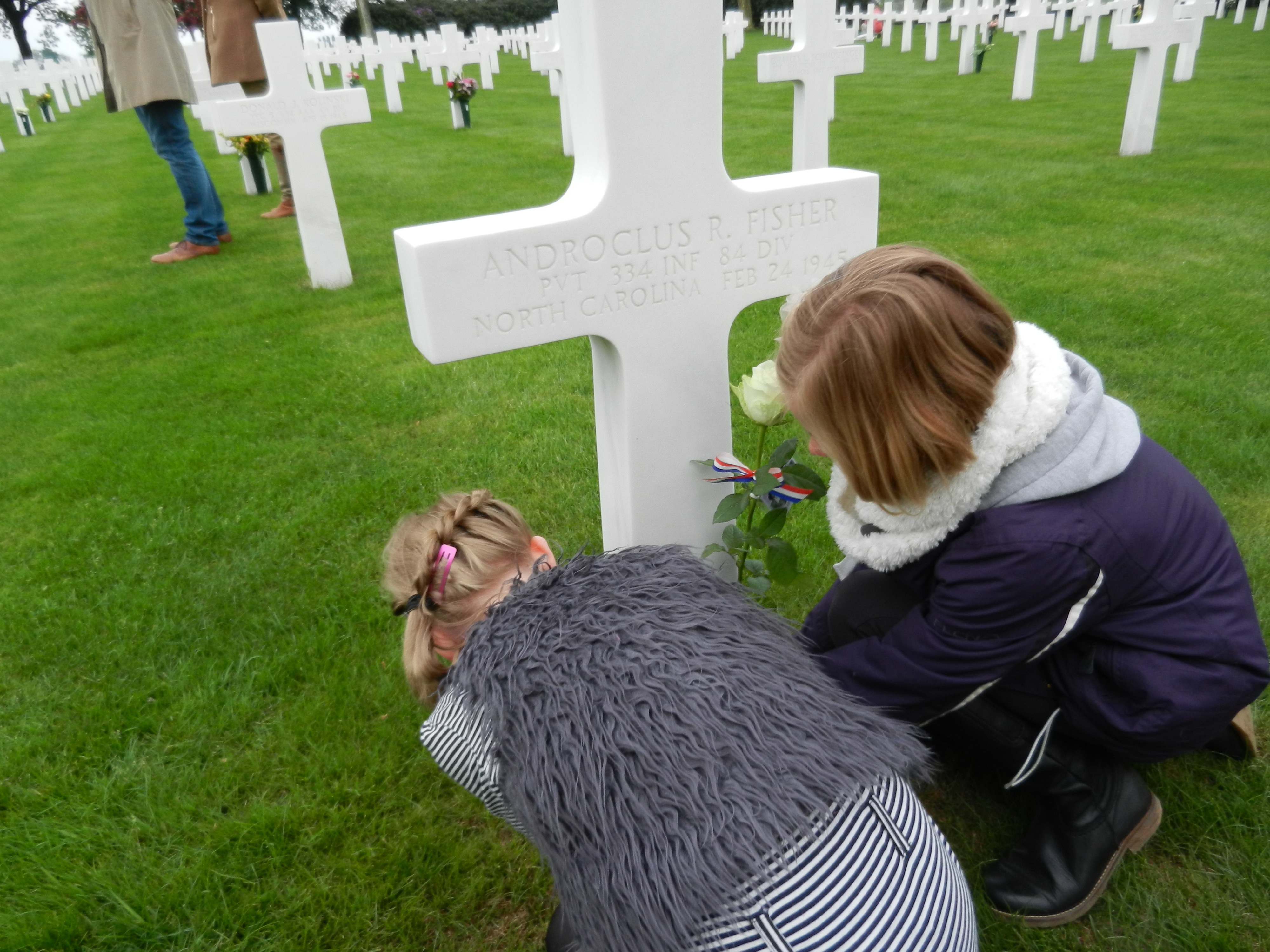 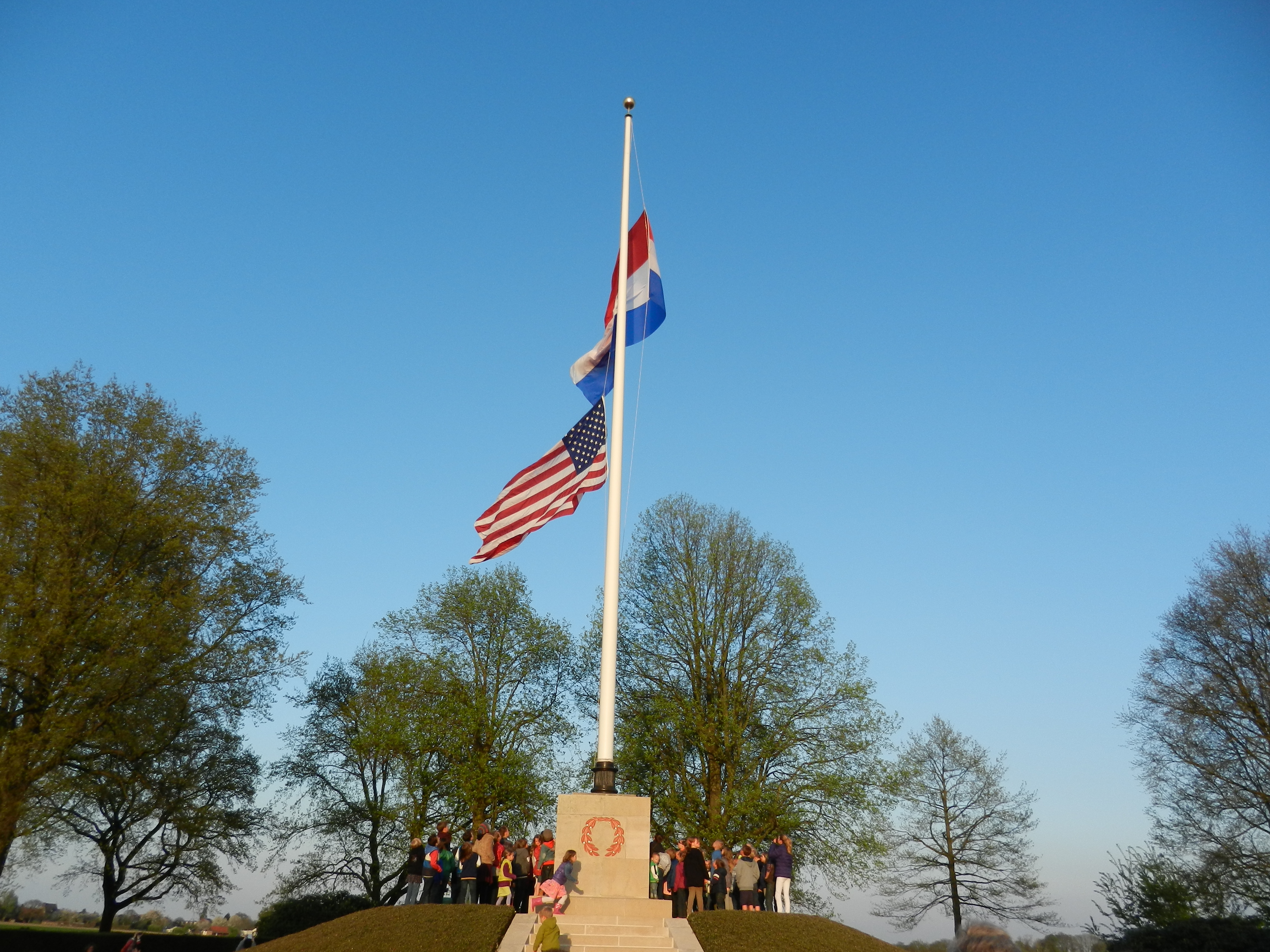 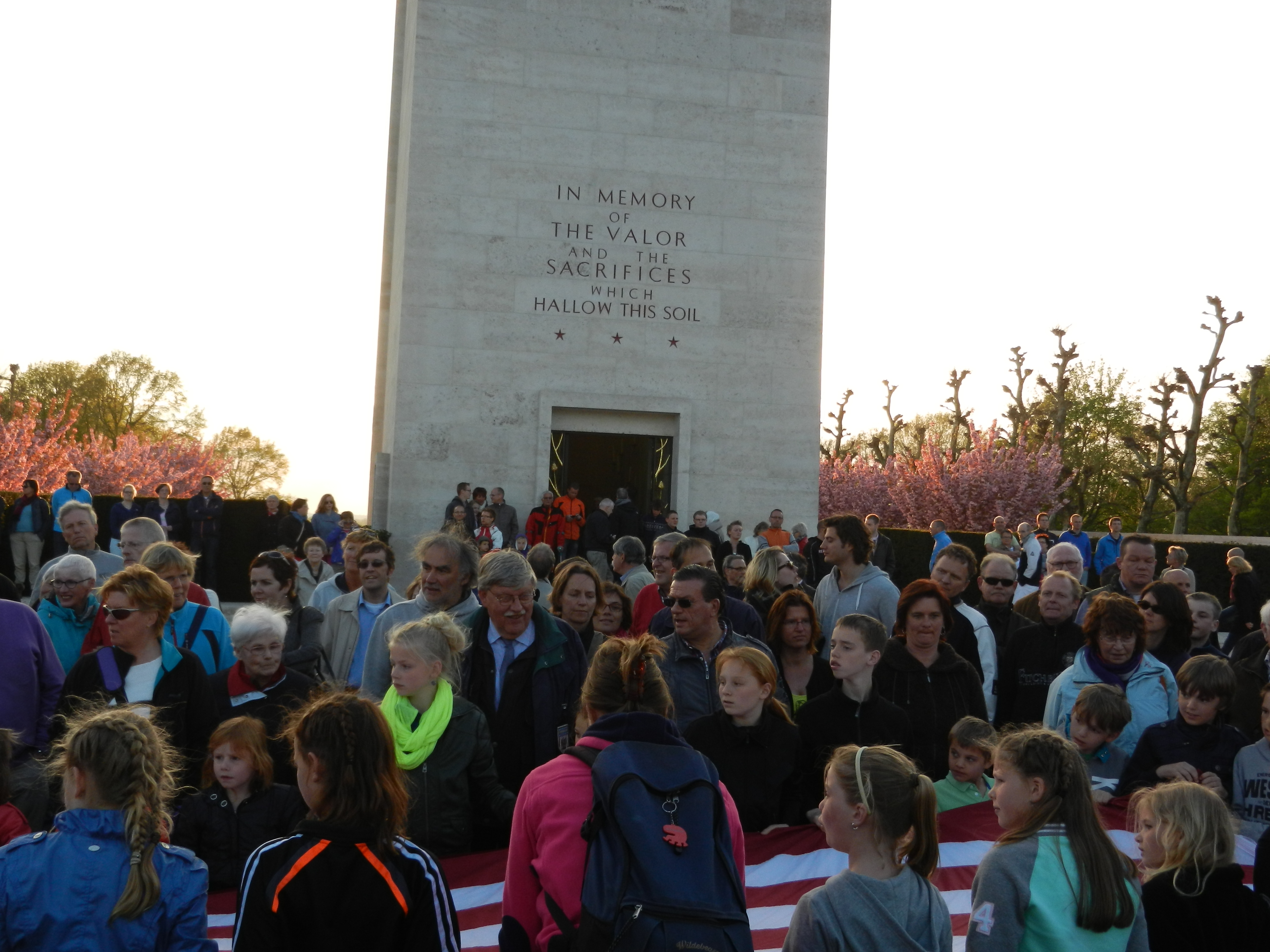 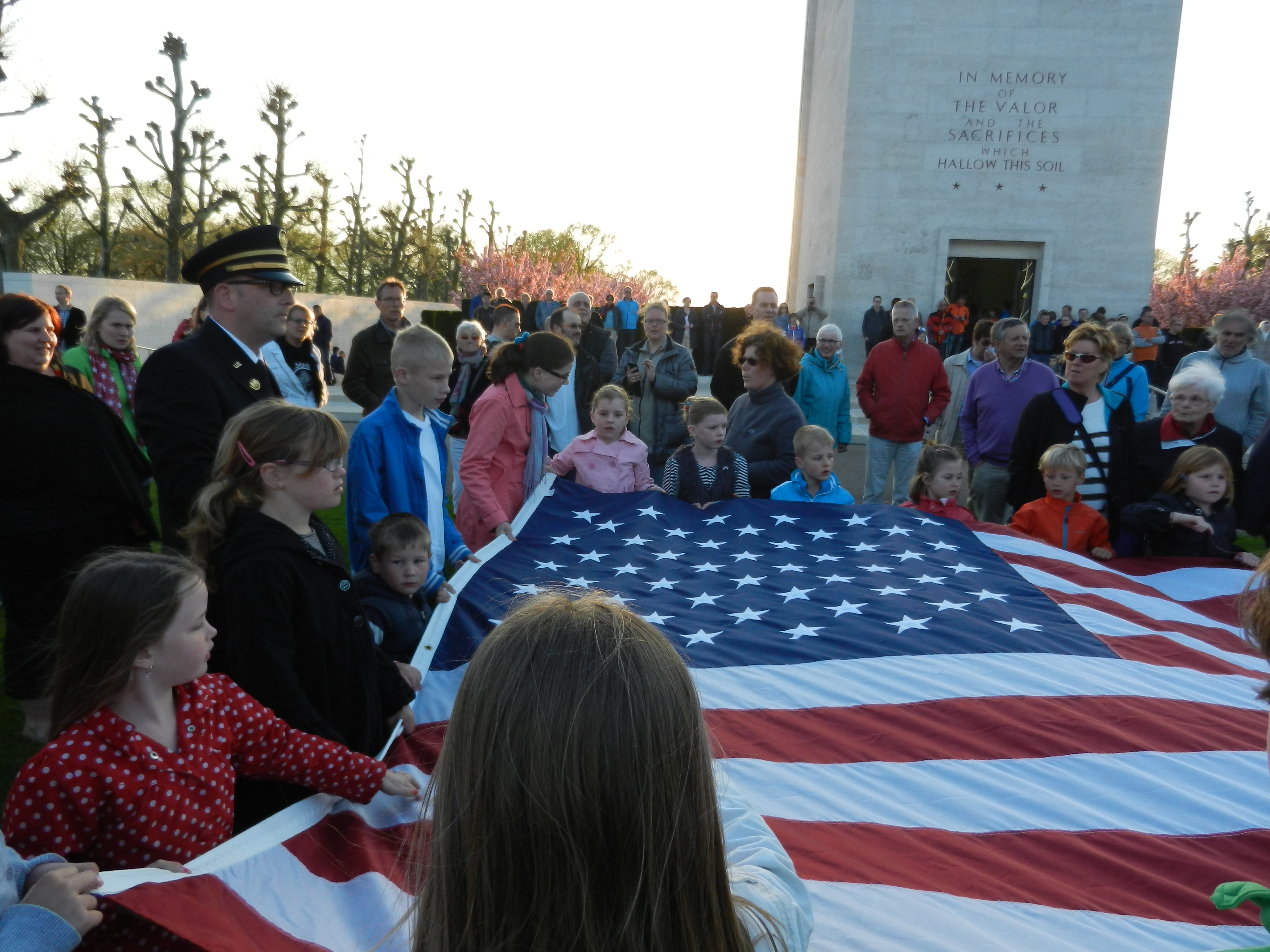 Robert Bates was a native of Park Ridge, Illinois, and entered The Citadel in 1941 with the Class of 1945. He enlisted in military service on December 11, 1942, and was allowed to return to his studies. In July 1943, the summer between his Sophomore and Junior years, he was called to active duty by the U.S. Army.  He received his training in California and Colorado before reporting for duty overseas. In Europe, he served with the Military Police (MP) Platoon, Headquarters Company, 104th Infantry Division.

“The 104th Infantry Division landed in France on 7 September 1944. It moved into defensive positions in the vicinity of Wuestwezel, Belgium, 23 October 1944, and went over to the, offensive on the 26th, taking Zundert, gaining control of the Breda-Roosendaal Road and overrunning Vaart Canal defenses. Leur and Etten fell as the Division advanced to the Mark River, 31 October. A coordinated attack over the Mark River at Standdaarbuiten, 2 November 1944, established a bridgehead. Zevenbergen was captured and the Maas River reached on 5 November. While the bulk of the Division moved near Aachen, Germany, elements remained to secure Moerdijk before being relieved on 7 November.”[2]

During the fighting for Standdaarbuiten, Holland, Cpl. Bates volunteered to swim the Mark River to establish a bridgehead. He successfully completed his mission, but was critically wounded. He died the next morning, November 3, 1944. Cpl. Bates’ body was repatriated after the war, and he now rests in peace at Oakridge Cemetery in Hillside, Illinois.[3] [4]

1Lt. Newman, a native of Winston Salem, North Carolina, was killed in action in the vicinity of Montfort on February 26, 1945 while serving as the Commanding Officer, Company C, 7th Armored Infantry Battalion, 8th Armored Division. He, along with seven other Citadel Men, rests in eternal peace at Netherlands American Cemetery. His grave is situated in Plot D within meters of three of those seven.

In total, there are 8,301 graves and 1,722 names of the missing recorded on the Walls of the Missing at the cemetery just outside of the village of Margraten. They have all become known as Margraten Boys, and they are not forgotten.