Walter Raymond Erness, born June 7, 1917, graduated from The Citadel with a bachelor’s degree in Physics in May 1941. His 1941 Sphinx senior write-up reads…

‘ERNIE’ hails from Rochester, N. Y.— a man of all kinds of power whose power was greatly enhanced when he started parting his hair in his Senior year. Likes everything living, and whether it sounds like bad logic or not, we don’t hesitate to say that everything living likes him, too. [1]

He was a member of Cadet Company “I” as well as a member of the Standing Hop Committee his sophomore, junior and senior years. He was also President of The Citadel chapter of Sigma Pi Sigma, the Physics Honor Society, his senior year.

Erness was commissioned into the Coastal Artillery Reserve in May of 1941. He enlisted in the US Army Air Corps in July 1941. Already having his private pilot’s license, he elected to become a navigator. [2] He was assigned to the 330th Bomber Squadron, 93rd Bomber Group and flew several missions from Alconbury, England against German targets on the European continent. Near the end of November 1942, the 330th was sent to the former French “Tafraoui” aerodrome near Oran, Algeria to fly missions against German and Italian targets on both sides of the Mediterranean in support of the North African Campaign. [3] 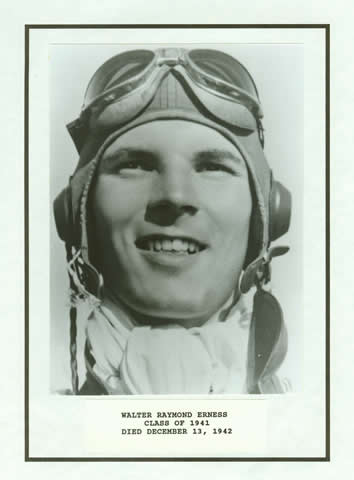 Second Lieutenant Erness was killed in action on December 13, 1942. His plane, B-24 41-23909 “Ambrose #2”, piloted by John “Packy” Roche and co-pilot Robert L. Brown, was attacked by FW-190s just after they had dropped their bomb load on the docks and harbor at Bizerte, Tunisia. The plane’s gas line was hit as were several of the crew. According to accounts from the surviving crew,

“Packy gave the crew the OK if they wanted to bail out but because of the wounded would try to bring the ship in. The crew elected to stay on board.” [4]

Roche was able to get the plane back as far as Bône Art, Algeria before all engines quit. He was able to make made a dead stick landing in a field, a feat that had been thought impossible for the Liberator.

“The plane hit a gulley in the middle of the field and reared up on its nose when the nose wheel snapped and broke its back. The dead were Lt. Walter R. Erness, Lt. Estell A. Martin and Sgt. Henry M. Elder. The Algerian natives came out and would have stripped the plane of its shiny parts, but Roche kept them at bay with his .45. It was a bad night for the survivors guarding their dead and the wreckage.” [5]

After the war, the body of 2Lt. Erness, ’41, was repatriated to his hometown in the United States. He rests in peace at Riverside Cemetery, section S, vet. plot, grave 123, Rochester, New York. [6]