Born on April 9, 1923, in Sulphur Springs township, Rutherford County, N.C., to Nevada “Vada” Jane McMahan and Lee Roy Robbins, Bruce Robbins grew up on a farm near the small town of Bostic just outside of Rutherfordton.

Cadet Robbins entered The Citadel at Charleston, South Carolina, with the Class of 1943 at the start of the 1939-40 academic year. He was a member of Band Company all four years. Throughout his four years at The Citadel, he was involved with The Shako, the cadet magazine, and was its Associate Editor his senior year. He also played in the Symphony Orchestra. He received Gold Stars for academic achievement his junior year and was President of the Beta Chapter of Gamma Alpha Mu his senior year. 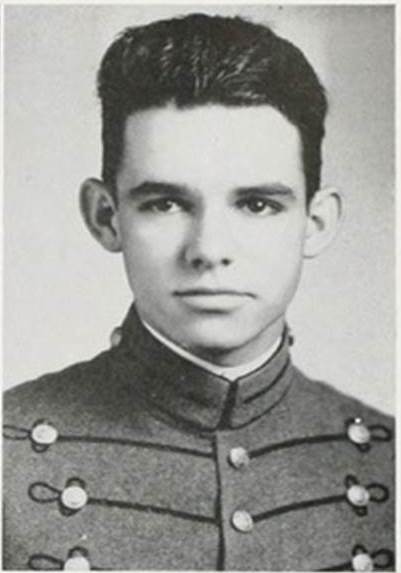 The Citadel chapter of Gamma Alpha Mu was formed in 1941. The organization was founded in 1928 at Clemson College for the purpose of recognizing literary ability and achievements. Gamma Alpha Mu was the highest honor a cadet could achieve in appreciation of his work in the literary field. Fellow classmate and English major, William C. Whitley, Jr., was also a member.

After graduating with a Bachelors degree in English on Saturday May 29, 1943, Bruce attended the infantry school at Fort Benning and received his commission as a second lieutenant on December 27, 1943. The 5 foot 11 inch, 135 pound Robbins later transferred to the paratroopers. On August 17, 1944, he shipped off for England with Company D, 513th Parachute Infantry Regiment.

On December 19, 1944, three days after Field Marshall Von Rundstedt’s Unternehmen Wacht am Rhein (Operation Watch on the Rhein) erupted, the untested 513th received orders to depart Barton Stacey, England, for France. Some elements flew to the airfield at Reims. Others crossed the Channel by ship. On December 24, 1944, the Regiment arrived at Mourmelon la Grande and, along with the other elements of the 17th Airborne Division, was attached to Patton’s Third Army.

From December 27 to 31, the Regiment organized a defense of the Meuse River along the line of Cheveuges – Stenay – Verdun, as the Germans were still pressing their advance west. Their penetration was stopped short of the river at Dinant. The Regiment saw no action except patrolling, attempting to pick up reported enemy parachute drops and light strafing and bombing of towns, railroad and bridges along Meuse River.

On January 1, 1945, the Regiment departed Chatel Chehery for the front line west of Bastogne. The next day, the Regiment reached its assembly area in the vicinity of Morhet, Belgium. The Regiment was ordered north towards Flamierge and Flohamont. Company D and the Second Battalion were ordered to relieve elements of the 11th Armored Division in Monty, a hamlet 200 meters south of Mande-Saint-Etienne. The two hamlets were separated by a crossroads. The Regimental Commander, Lt. Col. A.C. Miller decided to take up position in the village of Mande-Saint-Etienne which was still occupied by Germans. Eventually, the paratroopers drove the Germans from the village. The Germans entrenched themselves in an area of woods overlooking the village. Company D and F dug into a strong defensive position but remained under constant German fire. 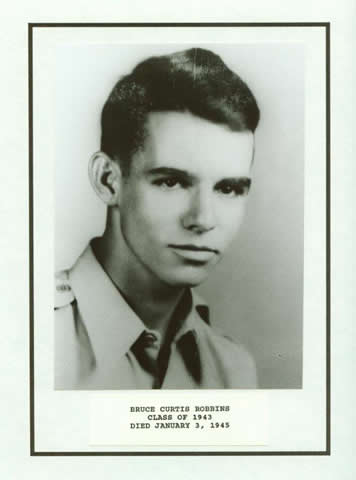 On January 3, the Regiment received its first Division Attack Order. It was to attack to the north, from the vicinity of Monty toward Flamisoul and the Ourthe river. Second Battalion, in their occupation of Monty and Mande-Saint-Etienne, continued to fight elements of the 29th German Armored Regiment who delivered sharp, small actions  in the form of small infantry attacks, tank thrusts with direct fire, and artillery and mortar. Its mechanical communications were out, and the Battalion was semi-isolated by fire. On this day, Lt. Robbins was reported killed in action.

Second Lieutenant Robbins was buried at the temporary U.S. Military Cemetery at Grand Failly, France, Row 8, Grave 178. Following the war, his body was repatriated and reburied at his final resting place peace at Cool Springs Cemetery, Forest City, N.C. He was survived by his parents and three sisters, Jean, Lois, and Miriam.