Charleston was much saddened yesterday to learn through The News and Courier of the death in France of Capt. James H. Holmes, Jr., of Charleston, and Capt. Julius A. Mood of Summerton. Capt. Holmes’ wife and little baby, whom he has never seen, are in Hendersonville, N.C., with his parents. His widow was Miss Adela Follin, of Charleston. 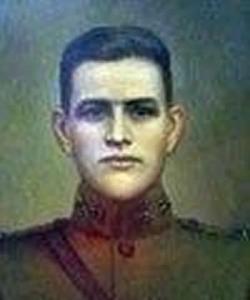 Capt. Holmes graduated at the Citadel in the class of 1915, with the rank of senior cadet captain, the highest attainable in that splendid battalion, long recognized by the War Department as one of the most efficient, from a military point of view, in the whole country. He stood well in his classes and was popular with his fellow cadets. He earned a commission in the regular army. He was the first man of his class to fall in France, though it is splendidly represented overseas.

Capt. Holmes died while leading his men in the face of violent machine gun firing and shell fire, and has been buried on the battlefield. Capt. Holmes was buried “at a crossroads in a wheat field, two kilometers southeast of Missy-au-Bois.”

While a wide circle of friends sympathize with the family of this young officer, they congratulate him on the splendid upholding of the highest American traditions. He died carrying the fight to the enemy despite the terrible machine gun and shell fire to which he was exposed.