Born on November 5, 1921, to Virgnia and William C. Whitley, Sr., William Junior hailed from Durham, North Carolina. He graduated from Durham High School in 1939 and then joined the South Carolina Corps of Cadets at The Citadel to major in English. He was a member of Cadet Company A his first three years at the college. His senior year he was a Cadet Second Lieutenant in Cadet Companies C, P, and E. He was also the Editor-in-Chief of the “Bull Dog”, the cadet newspaper, earned Gold stars for outstanding grades, and was listed in the “Who’s Who Among Students in American Universities and Colleges”.

Sworn into the U.S. Army on May 3, 1943, at Fort Jackson, Columbia, S.C., William, and almost all of his classmates, immediately departed for basic training upon graduation later that month. While in the European theater, Corporal Whitley served with Company B, 1st Battalion, 7th Infantry Regiment, 3rd Division. He was killed in action in France on November 4, 1944, the sixth straight day of the Battle of Le Haut Jacques in the Vosges near St. Die.

“November 4 proved to be the final day of the Battle of Le Haut Jacques and the most furious during the entire fight […] Colonel Harrell ordered an all-out assault to seize the Le Haut Jacques crossroads. Every company in the 7th Infantry Regiment, except Company L, took part… 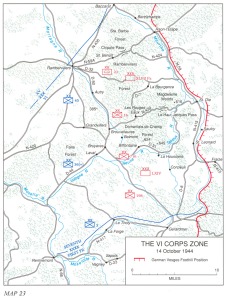 Many American survivors of the Battle of Le Haut Jacques, even months later, still referred to it as the ‘Crossroads of Hell.’ Of the 7th Infantry Regiment veterans of Anzio who also fought at Le Haut Jacques, they recalled at times the fighting was ‘worse than they had seen all during the beachhead siege and the drive to Rome.'”[1]

Cpl. William Cleveland Whitley, Jr. was buried at the U.S. Seventh Army’s military cemetery at Epinal, France. Both his parents were originally from South Carolina, and following William’s death they returned to their home State. In 1948, Mr. and Mrs. W. C. Whitley had their son’s body repatriated to U.S. soil, and he now rests in peace at Woodlawn Memorial Park in Greenville, S.C.

The Disabled American Veterans’ Schackner-Whitley Chapter 21 in Durham, North Carolina bears Cpl. Whitley’s name as well as that of another Durham local, Thomas K. Schackner. Shackner served with the 48th Armored Infantry Battalion and died of wounds suffered in combat near Metz, France in September, 1944.