Caswell M. Higgs was born in Atlanta, Georgia on October 15, 1921 to Mary Claire Marbury Higgs and James Allen Higgs, Jr. He  entered The Citadel in August of 1940 as a freshman with the Class of 1944 and was assigned to Cadet Company I. His sophomore year, he was a Cadet Corporal in Company K and became a member of the school’s Calliopean Literary Society and Sons of the American Revolution. [1] [2] At the end of the 1941-42 academic year, Caswell enlisted in the U.S. Army on May 29, 1942 at Charleston, South Carolina. He became an infantry officer and was sent overseas to Europe. [3] 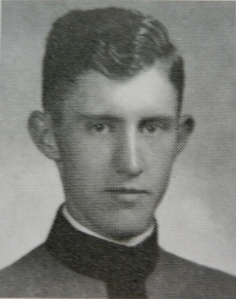 In Europe, Second Lieutenant Higgs was assigned to Company H, 2nd Battalion, 317th Infantry Regiment, 80th Infantry Division. He led a machinegun platoon of the battalion’s heavy weapons company. The 80th, nicknamed the “Blue Ridge Division”, sailed from America aboard the SS Queen Mary and arrived in Scotland on July 7, 1944. After several weeks of training in England, the division crossed the channel and landed at Utah Beach on August 2, 1944. Their baptism of fire came at the LeMans bridgehead on August 8th. [5]

Seven months later, on March 28, 1945, 2Lt. Higgs was killed in action after successfully leading his platoon across the Rhine River and establishing a beachhead for his battalion. That day, Company H suffered twelve casualties in the action: 3 killed, 7 wounded, and 2 missing. [7]

2Lt. Caswell M. Higgs was posthumously awarded the Silver Star for his actions that day. The citation reads:

“The President of the United States of America, authorized by Act of Congress July 9, 1918, takes pride in presenting the Silver Star (Posthumously) to Second Lieutenant (Infantry) Caswell M. Higgs (ASN: 0-1057101), United States Army, for gallantry in action as a member of Company H, 317th Infantry Regiment, 80th Infantry Division, in action against the enemy on 28 March 1945. While leading his machine gun platoon during a night assault crossing of the Rhine River, he was wounded in the shoulder by enemy machine gun fire. Refusing medical aid, he ordered his assault boat to proceed to the enemy-held bank of the river where he personally led his men in capturing two enemy gun emplacements. Lieutenant Higgs then led his men farther into the enemy lines and secured a small beachhead, which allowed the succeeding assault troops to land with comparative safety. He was again wounded, mortally, while reorganizing his platoon. Lieutenant Higgs’ heroic actions were an inspiration to his men.” [9]

Following the war, 2Lt. Higgs body was repatriated to the United States for reburial. According to U.S. Army records, his body was returned to Georgia, cemetery not indicated, per the wishes of his next of kin. [10]

Lt. Higgs was one of three Citadel Men killed in action while serving with the 80th Infantry Division. Captain MAXWELL FARMER PARROTT, Class of 1937, CO of HQ Battery, 633rd AAA AW Battalion, was killed in action on December 4, 1944 at St. Avold, France when the house in which he was billeted was blown up by a time-bomb left by the retreating Germans. Capt. Parrott now rests in peace at Greenlawn Memorial Gardens, Spartanburg, South Carolina. Private First Class WILSON ADELBERT WENDT, Class of 1945, an infantryman with Company E, 2nd Battalion, 317th Infantry Regiment, was killed in action in Germany on April 11, 1945. PFC Wendt now rests in peace at Netherlands American Cemetery.