Last summer, my family and I visited the Philippines. Seeing and enjoying The Citadel Memorial Europe’s website made me think of those who fell in the Pacific Theater so before going I planned and prepared an expedition to the Manila American Cemetery and Memorial. I learned that there are 34 Citadel Men among the 17,201 men and women buried there and 36,285 memorialized on the Tablets of the Missing. Garrett Jackson, ‘01, shared with me a lot of helpful information about these alumni, and I became determined to pay my respects. At the cemetery, we spent the good part of a day seeking out the names and graves of Citadel Men, and finding the names of members of my wife’s family on the Tablets of the Missing.

Overwhelming in beauty, size, and history…
The Manila cemetery contains the largest number of graves of our WWII military dead. After the War, the Philippine government donated land that was formerly part of Fort William McKinley to allow the US to create a space for memorializing the thousands of Americans and Allies lost during the fighting throughout Southeast Asia, from New Guinea to the Philippines, from the jungles of Bataan and Guadalcanal to the seas off Japan and Taiwan.

Vertical marble tablets are engraved with 36,285 names including those of 28 Citadel Men.

The land is on a high plateau in the middle of Manila not far from the headquarters of the Philippine armed forces. The cemetery was originally surrounded by open space and residential areas; however, Manila is experiencing a huge economic boom, and there are quite a few skyscrapers going up across the downtown so the cemetery is being surrounded by large office buildings and hotels. This makes the approach to the cemetery very dramatic as you ride through a forest of tall glass and steel buildings and then round a bend in the road to find the open, green space of the cemetery. Landscaped green spaces are highly unusual in the Philippines so seeing the manicured grass, well-tended trees, and trimmed hedges is really a sight to behold.

In addition to the graves of American servicemen; there are graves of 570 Philippines as well as natives of 14 other countries, all of whom fought and died alongside our troops. The cemetery includes a central carillon tower and a circular marble and limestone monument built of dozens of vertical slabs. On the slabs are engraved the names of thousands of Americans and allies who were missing in action, buried at sea, or lost their lives in the Pacific Theater and whose remains could not be recovered. The central memorial is surrounded by row upon row of graves distributed across the grassy hills under the shade of huge mahogany and acacia trees. Despite the variety of nationalities represented the cemetery sees only a slow stream of visitors on any given day. The day of our visit was highlighted by a large group of Korean tourists visiting the cemetery and receiving a guided tour. The low number of visitors provides for a quiet, contemplative atmosphere in which to pay one’s respects to the heroes. 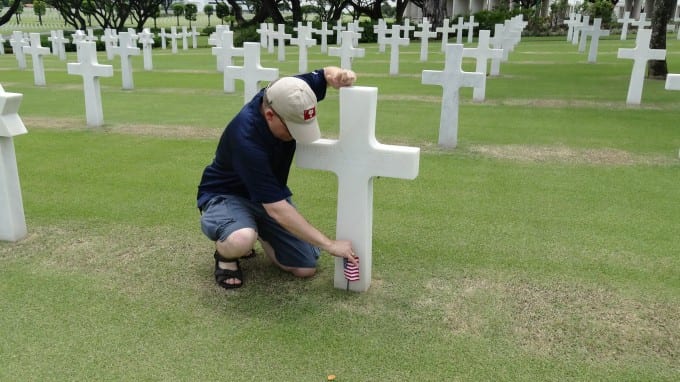 1Lt. Harold Bradford Chandler, Jr., Class of 1939, killed in action in the Philippines.

Paying respects to our own…
Visiting the cemetery was an amazing experience. Fortunately, my wife joined me. She was a real trooper hiking around all of the graves. It’s hard to explain the feeling of being there and paying respects to those heroes who sacrificed their lives in lands so far from home. Seeing the engraved names on the Tablets of the Missing was one thing but visiting the graves of those entombed under the grassy hillsides was very moving.

My wife and I circled the entire cemetery locating the graves of six Citadel Men. The struggles and sacrifices they went through while fighting in the tangled jungles of Southeast Asia were brought home to us by the exhaustion we felt after walking over the well-tended grounds in the hot, humid weather. It was moving to consider. Stopping at each of the graves thoughts ran through our heads. “Who have been here to pay their respects since these men were buried almost 70 years ago?” “Has a relative been able to come visit him?” I gave in to the urge to say something at each of the graves, a short prayer or a brief greeting to the Citadel brother. “Hey, how are you doing?” “I can’t imagine fighting a war in this heat and humidity.” or “I’m from El Cid and wanted to say thanks for what you did.” Then we planted a small American flag in front of the tombstone and briefly unfurled Big Red to wave over the grave.

Click here for a slide show of the Manila American Cemetery 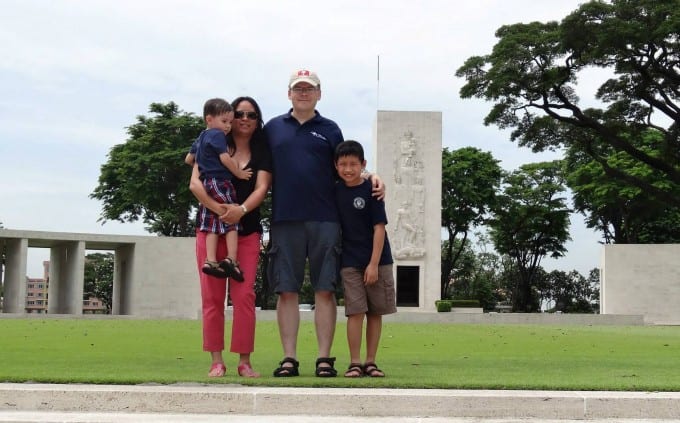 Until we meet again…
More than 400 Citadel brothers who died while in the service of their country and its allies are resting in cemeteries around the world. Visits by members of our Citadel family to some of the more distant sites have, I am certain, been few and far between. These fallen brothers are remembered as but one in a large field of markers spread across a grassy hillside in some near or distant land; or as a name inscribed on a white slab amongst hundreds of other names of those who were never recovered. My family and I roamed the marble corridors and explored the hills and valleys there in the center of Manila, stopping to acknowledge the Citadel heroes. Afterwards I was totally exhausted – physically, mentally and emotionally. Nevertheless, it is an experience that I cannot wait to repeat, and one which I would urge all Citadel alumni to undertake whenever traveling throughout our country or world.

About the guest author:
Matt Lacina  is a 1989 graduate of The Citadel where he earned a Bachelor of Science degree in Business Administration. Matt is a resident of Philadelphia, Pennsylvania and is the Director of Operations at Padtech AS which is located in Flemington, NJ.