This news article was originally published by the Opelika Observer on Thursday, 28 November, 2013. 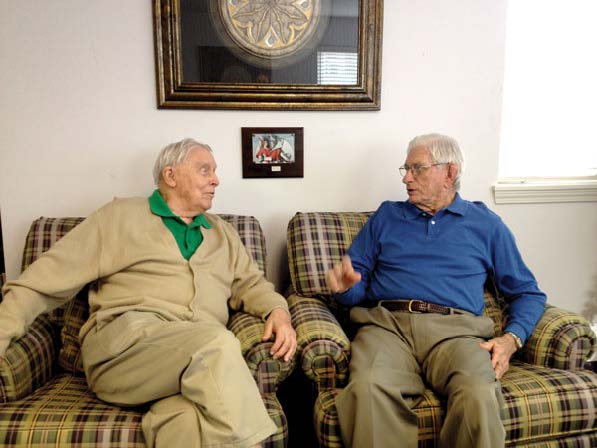 Henry Garlington, ’45, and Charles Skinner were in a POW camp together during World War II. They were recently reunited after not seeing each other for almost 70 years through the efforts of their children.

In 1944 the tide was turning in Europe for the Allied forces, but every day, soldiers and airmen were still being captured and taken prisoner by German forces.

Henry Garlington was shot down in Italy in June 1944, as his low-flying fighter plane was hit by enemy fire; Charles Skinner and the rest of his bomber crew went down near Pardubice, Czechoslovakia, during a mission to bomb oil fields near the town.

Both men eventually were taken to Stalag Luft III, a Luftwaffe-run POW camp near the town of Sagan, 100 miles southeast of Berlin.

The two were placed in the same combine and barracks, and a friendship was quickly forged. While the rations afforded to the men were scant, both can remember saving what little they had to be able to pool with others in the barracks to have treats for all.

“We had us a few guys that cooked really well, so we’d all throw in and they’d make a little cake for everybody,” Skinner said. “It was a simple treat but something we all really appreciated.”

At Stalag Luft III, the men had plenty of free time, which they could spend playing organized sports or reading in the camp’s limited library.

“The guards were mostly old men who were past the age of being able to fight or young guys who had no idea what they were doing,” Garlington said. “They were pretty open to being bribed, so you could scrounge for whatever you might need – a few eggs, a scarf in the winter – that kind of thing.”

Stalag Luft III had gained notoriety because of an October 1943 breakout by some Allied officers through a self-dug tunnel – in what later became known as “the Great Escape,” from which the 1963 film was based. By the time Skinner and Garlington arrived at the camp, any escape plans had to approved by the Escape Committee and voted on by its members – so to speak.

“None of us ever really considered escaping,” Garlington said. “Once we got out, we really wouldn’t have had anywhere to go or know where to go, so we just stayed put.” However, they didn’t stay put for long. By January 1945, the Russians were making their way into German-occupied territories, and the Red Army was less than 30 miles from Sagan when Skinner and Garlington remember being told to grab everything they could take.

The pair set to work dismantling their beds, using their headboards to create a make-shift sled to carry their belongings. They bundled up with what clothes they had – GI overcoats given to them by the German guards and a few scarves Garlington had managed to obtain.

“We started our march, and we noticed that we weren’t alone,” Skinner said. “Most of the civilians in Sagan made the march with us, since they didn’t want to be captured by the Russians either.”

Their destination was Moosberg, to another POW camp located there, but the march would take several days in the frigid German winter. Skinner and Garlington took turns pushing and pulling their homemade sled, not sure of where they were going or when they might get there.

“It was a tough march, and not all of the men made it through,” Garlington said.

Upon their arrival, the camp at Moosberg was already overflowing with people, and the rations were as bad as, if not worse than, what they endured on the march. The latrines overflowed with waste, and the Germans did little or nothing to help accommodate them.

Over the next few months, conditions continued to worsen, as it became increasingly apparent that the Germans were losing the war. Garlington said the POWs would occasionally
attempt to stand up to their disheartened guards, refusing to line up for roll call.

“The defiance would work pretty well until they’d decide to bring the dogs in,” Garlington said. “Once they sent for the dogs, we’d all stumble out and line up.”

On day in late April, the sound of artillery fire could be heard in the distance, and a short while later, General George Patton and his Third Army division crashed through the gates and began the liberation.

Garlington had gone out that day to try to find a few eggs and upon his return was met by one of Patton’s aides.

“He asked me where the hell I had been, so I told him,” Garlington said. “He replied, ‘Patton’s been looking for you.’” Garlington’s father, a general, was a friend of Patton’s and had
asked Patton to check every POW camp he liberated for signs of his son. 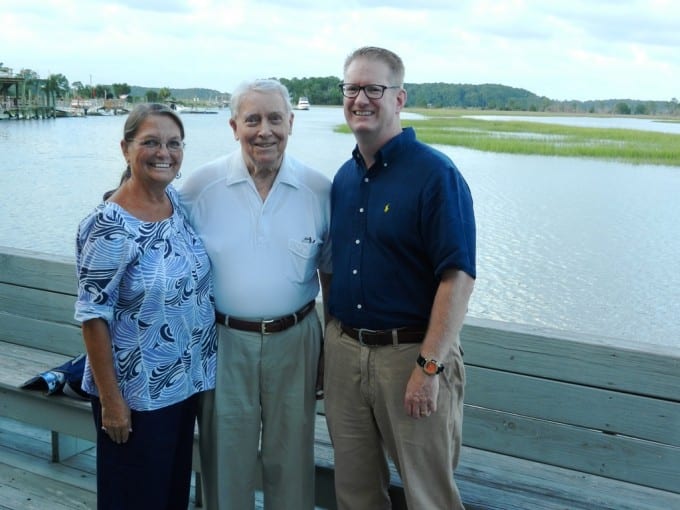 Henry Fitch Garlington, Class of 1945, and his daughter, Katherine, were visited by me (Roger Long, Class of 1989) and my family at Savannah, Georgia, in July 2013. I first learned about the Garlington family and their rich history of service to their country when researching Henry’s twin brother, Creswell Garlington, Jr., Class of 1944, who is interred at the Netherlands American Cemetery. Katherine’s internet forum post, referred to in the news article, also helped bring us together. After completing three semesters, Henry left The Citadel in December 1942 to volunteer for the US Army Air Corps in which he served until 1955. More about Henry and Creswell can be read in our previous blog post – “He Served: Henry Garlington, ’45” – by Ron Lauretti. /RL

Skinner had a bird’s eye view of the whole affair, perched on the roof of one of the barracks. He recalls watching the sea of people swarm out of the camp, happy to finally be free.

As Skinner departed, he found he was one of the few remaining occupants of the camp, and the guard gave him $50 as he left.

The pair boarded a ship at Le Havre bound for New York and eventually found their way back to Atlanta.

Skinner found a bus ready to take him to his hometown in Monroeville; Garlington boarded a train to Savannah back to his waiting family.

Those two men never thought they would see one another again, until fate (and their daughters) intervened.

Last weekend, after almost 70 years, Skinner and Garlington were reunited at Monarch Estates in Auburn, the culmination of years of searching for Skinner by Garlington’s daughter Katherine, which started in 2002.

“One day, my dad just started talking about all of his memories from the war and being in Stalag Luft III,” Katherine said. “We asked him if there was anyone he wanted to get in touch with, and he said ‘The only person I want to find is Charlie Skinner.’”

Katherine searched the web and left a posting with her contact information on a POW website. In September, she received a letter from a woman in Pennsylvania whose stepfather had been a POW with Skinner and Garlington who had a lead.

Through that information, Katherine got in touch with Skinner’s daughter Charlotte, and the reunion has been in the works since then.

While reminiscing about their war experiences, Skinner and Garlington joked with one another about their experiences – Garlington ragged Skinner for getting to sleep in a bed “with clean sheets and a pillow” the night he was captured; Skinner ribbed Garlington for the rations he got while imprisoned in Italy, including the parmesan, or “prison cheese,” as they called it.

When asked what it was like to get to see one another after all the years, both said it was something they never thought would happen.

“After all this time, it’s a blessing to be able to sit here and talk with someone who went through the same things I did,” Skinner said.

Garlington nodded his head in agreement.

“There aren’t many of us left these days, so getting to see Charlie here again is just great,” Garlington said.

The two looked at one another and smiled, as Skinner lightly punched Garlington on the arm. While they might have been sitting in overstuffed chairs in Auburn, their minds were in wartorn Germany, reviving memories with one another they thought they would never get to discuss again.

About the author
A native Opelikan, Cliff McCollum is an amateur field herpetologist and newspaper creator extraordinaire. When he’s not teaching a class at the high school, attending city council or writing his column, you might find him serving chicken salad plates at Cottage Cafe. His sense of humor is exceeded only by his love for the Opelika community.