Spring Break: Over There

This article originally appeared in the Alumni News of The Citadel – Summer 2017. It is published here in its entirety with the permission of the Citadel Alumni Association. Photos have been added to this web post which did not appear in the original print version.

Cadets enrolled in Professor Kyle Sinisi’s class, History 391: The U.S. in World War I, spent their days of Spring break walking the American Expeditionary Force battlefields in France. Accompanying the class were Board of Visitors member, Col. Myron Harrington, USMC, Ret., ’61, and the director of Daniel Library, Lt. Col. David Goble, SCM, ’69. The group was also fortunate to have Matthew Davenport, critically acclaimed author of First Over There: The Attack on Cantigny, America’s First Battle of World War I, accompany them.

Citadel Cadets at the famous Bulldog Fountain near the village of Belleau.

In the village of Cantigny, they walked the terrain of America’s first combined arms attack as Davenport described the action where in the early morning of May 28, 1918, the 3,500 soldiers of the 1st Division climbed out of their trenches to cross the shell scarred fields of no-man’s land to capture the village of Cantigny from the Germans. After wresting Cantigny from the Germans, the 1st Division then held on for the next two days against severe German counter attacks.

Brig. Gen. Charles P. Summerall commanded the Division Artillery supporting the attack. Col. Robert R. McCormick, for which The Citadel Beach House is named, commanded the 1st Battalion, 5th Field Artillery during the battle. The village Mayor showed the group a large collection of expended artillery projectiles which are uncovered every year in the surrounding farm fields. The group was offered to take one of these “Vestiges de Guerre” as a souvenir.

Roger Long, ’89, joined the group at the Somme American Cemetery where a number of the soldiers killed at Cantigny are buried or listed among the missing. Here, Cadet Ben Duly told the group about Lieutenant Mulloy, Class of 1909, who was killed in action at the Battle of St. Quentin Canal on October 8, 1918, while serving with the 118th Infantry Regiment, 30th Division. At the end of the day, the cadets were given the honor of lowering the flag at the cemetery to the haunting strains of taps. 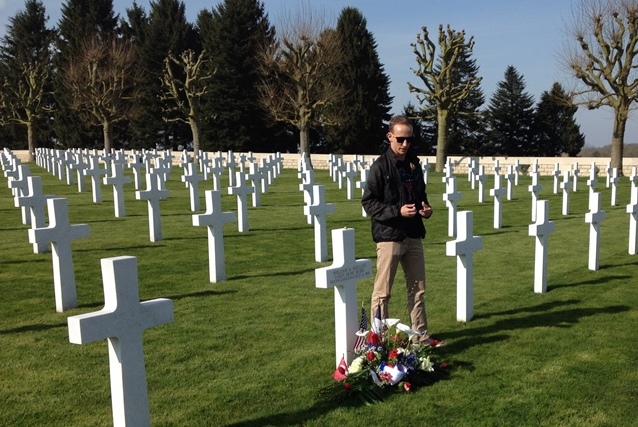 The third day the group covered the battles of Soissons, Chateau-Thierry and Belleau Wood. In a field, which saw some heavy fighting along the Soissons-Paris road, Cadet Anthony Kniffen told the group about Maj. Barnwell Rhett Legge, Class of 1911, and his exploits for which he received four silver stars. Legge would also receive the Distinguished Service Cross for actions in the Meuse-Argonne offensive.

At Chateau Thierry  the group visited the American Monument and the 3rd Infantry Division Monument commemorating the Second Battle of the Marne where the division earned its sobriquet “Rock of the Marne.” After a quick stop at the Aisne-Marne American Cemetery at the base of Belleau Wood, the group stopped at the Bulldog fountain where all the Marines slaked their thirst and, according to legend, added 10 years to their lives. Standing in the “wheat field” at Belleau Wood, the group listened as Matt Davenport give an excellent overview of the fighting at Les Mares Farm, Hill 142, Lucy-le-Bocage, and Bouresches. 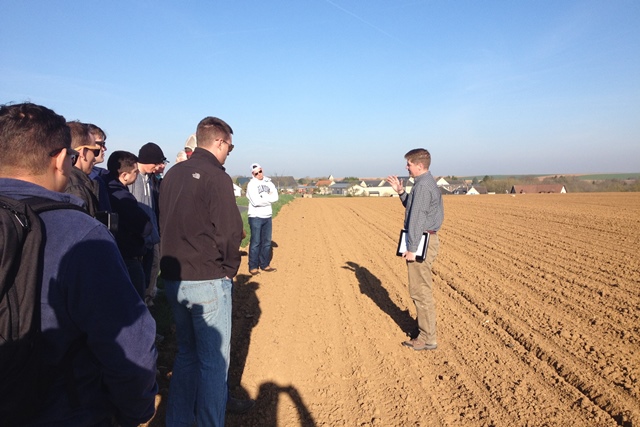 Matt Davenport, author of “First Over There”, describes the battlefield at Missy-aux-Bois, France.

The next day the group traveled along the Plateau Chemin des Dames and through beautiful countryside which a century ago was a shell scarred wasteland crisscrossed with French and German trench lines. Stopping briefly in the Village of Sommepy and the jump off line of the 2nd Division attack on Blanc Mont Ridge for a battlefield orientation, the group then visited the Sommepy American Monument. From the top of this monument one can see the preserved trenches, and trace the line left by the trenches into the freshly plowed farm fields still scarred a century later.

In the Argonne Forest, the group explored the site of the famous “Lost Battalion” where Cadet Phillip Nauert told of the exploits of Maj. Charles Whittlesey and his battalion surrounded behind enemy lines from Oct. 2-8, 1918; an action for which seven Medals of Honor and 30 Distinguished Service Crosses were awarded. After a brief lunch in the village square of Chatel-Chéhéry, they followed the route of Corp. Alvin C. York and stopped at the spot where he earned the Medal of Honor and, along with the surviving members of his squad, captured 132 German soldiers.

From the top the Montsec American Monument, the impressive panorama gives an overview of the St. Mihiel battlefield. It was here that an American Army first took the field during the war proving that U.S. forces were capable of operating independently of Allied supervision. It was also the first time American airpower played a major role. It was in this battle that the 1st Division, now commanded by Maj. Gen. Summerall, spearheaded the first attack. The group visited the St. Mihiel American Cemetery, raised the flags over the graves and heard Cadet Jeff Simon report on Lt. John Hodges David, Jr., Class of 1914, the first South Carolina officer and Citadel graduate to fall in France. 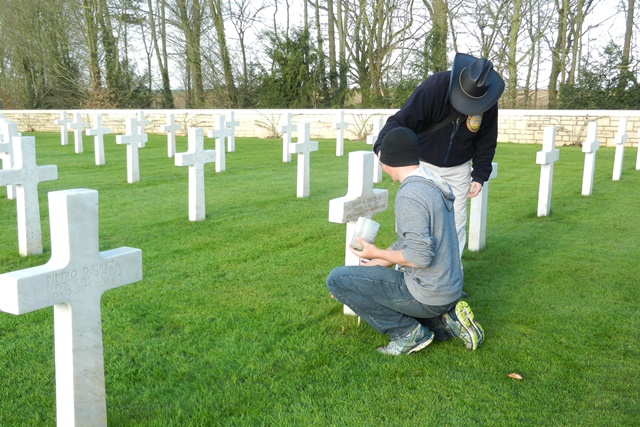 Under the watchful eye of the ABMC cemetery superintendent, Cadet Simon wipes sand into the lettering on the cross of 1Lt. John Hodges David, Jr., Class of 1914 at St. Mihiel American Cemetery.

From the impressive Montfaucon American Monument commemorating the American victory in the Meuse-Argonne Offensive, the group visited the Meuse-Argonne American Cemetery and Memorial near the village of Romagne-Sous-Montfaucon. In this, our largest military cemetery in Europe, rest a total of 14,246 of our military dead with another 954 listed on the tablets of the missing. The group also took the opportunity to tour a small but impressive private museum in the village, Romagne 14-18.

In Verdun, the group toured the Verdun museum and the large French national military cemetery and ossuary at Douaumont. In the cemetery rest 16,142 known French military dead while the Ossuary contains 130,000 unknown French and German soldiers. An additional estimated 160,000 lay in unknown graves in the surrounding area, testament to the savagery of the Verdun battlefield. 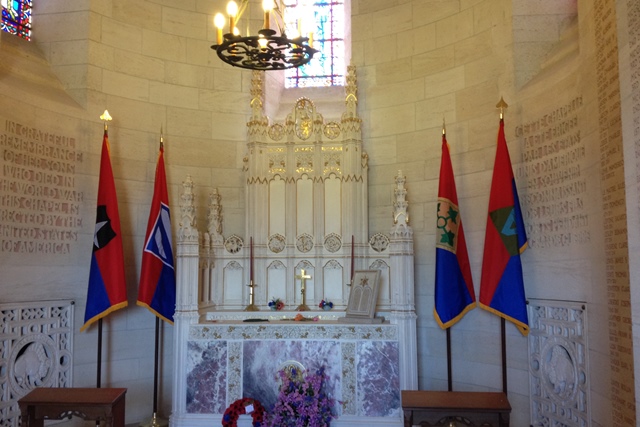 The interior of the chapel at Aisne-Marne American Cemetery. 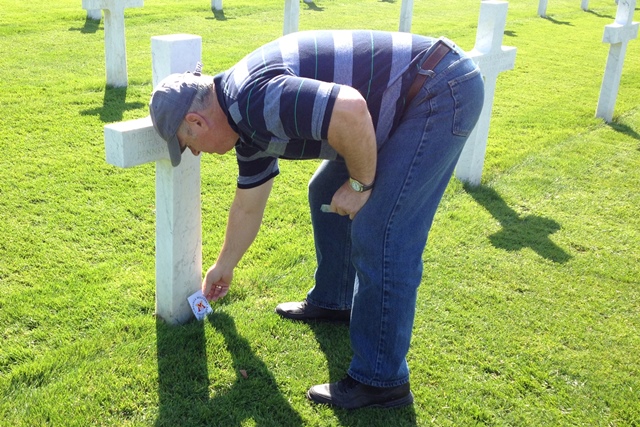 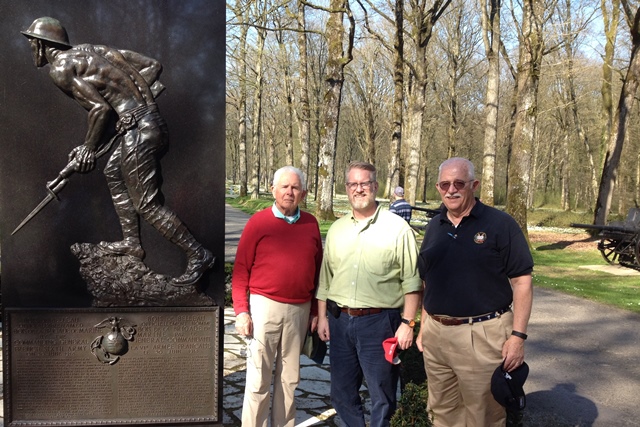 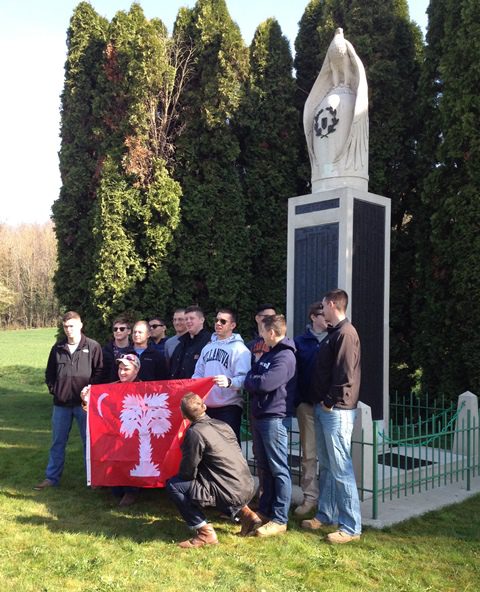 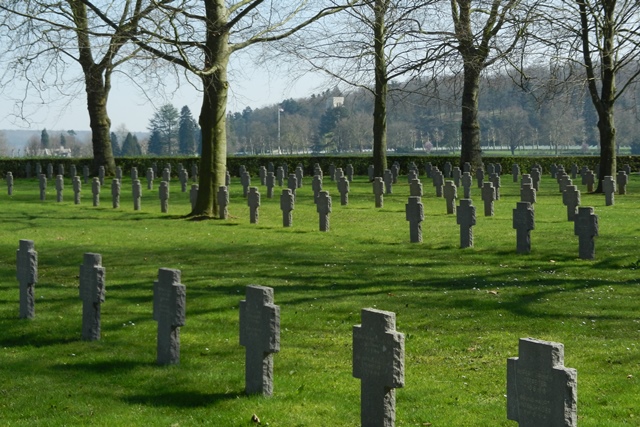 German cemetery at Belleau looking towards the Aisne-Marne American Cemetery 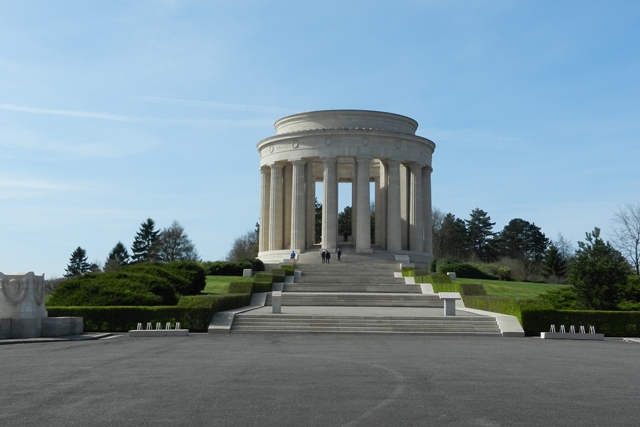 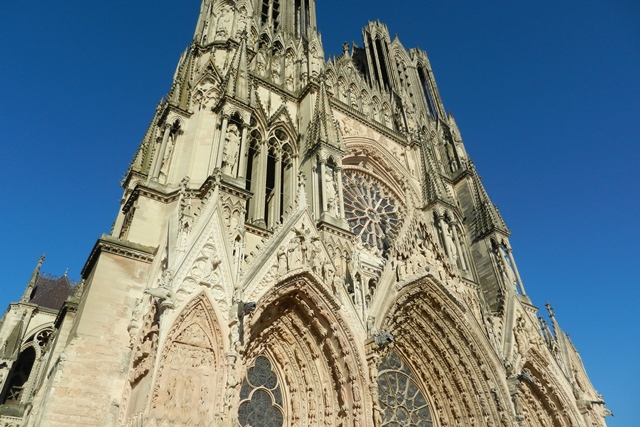 The Cathedral of Reims 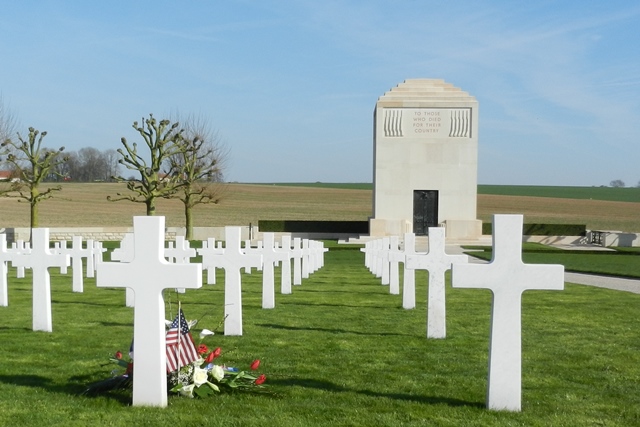 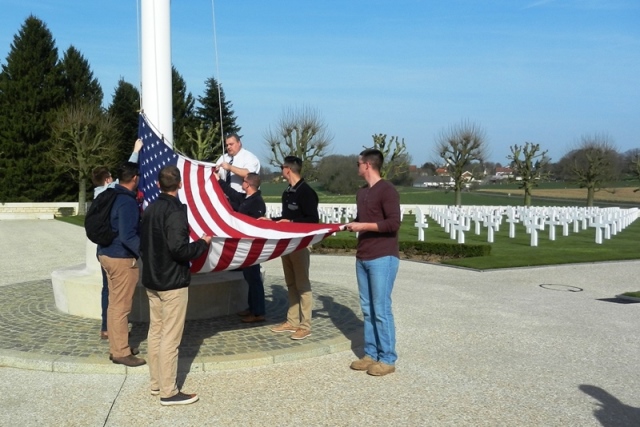 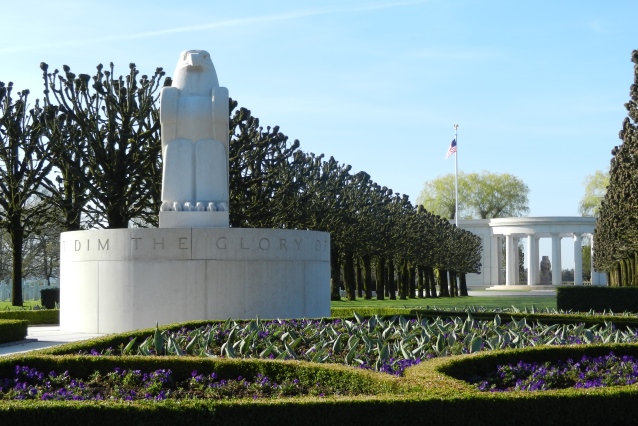 St. Mihiel American Cemetery. “Time will not dim the glory of their deeds.” – General Pershing 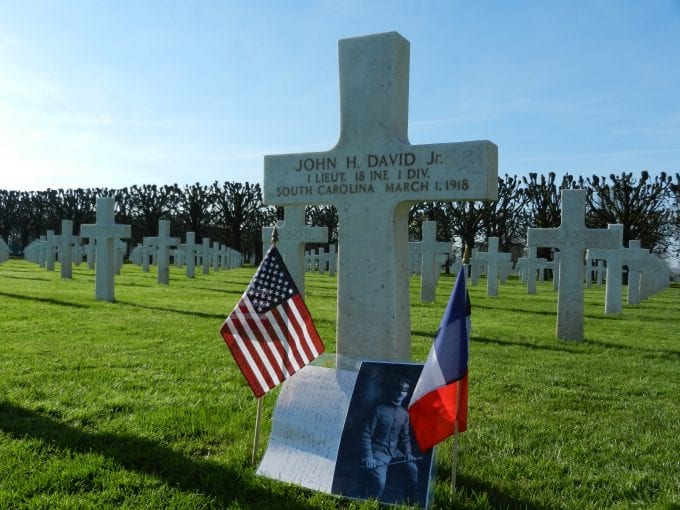 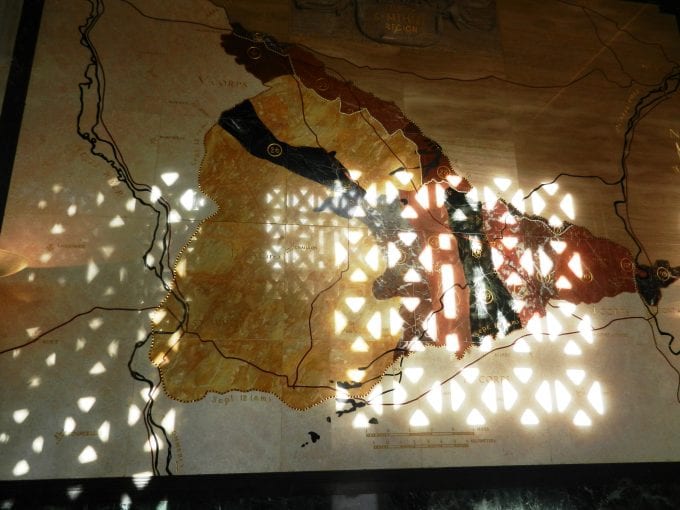 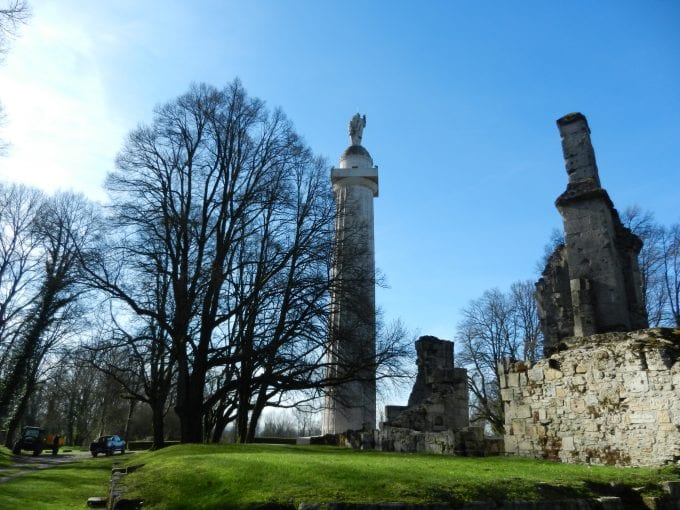 Traveling back to Paris the group stopped at the Armistice Museum and Memorial in the Compiegne Forest where a granite monument proclaims, “Here on the eleventh of November 1918 succumbed the criminal pride of the German empire… vanquished by the free peoples which it tried to enslave.”

Arriving in Paris later that afternoon, cadets had a day and a half to explore Paris before boarding the flight back to Charleston, returning to The Citadel in time for the end of furlough muster formation. It was a most memorable trip, but the class was not over. The cadets still had papers and a daily journal of their experiences to submit. They also took a trip out to Magnolia cemetery to visit the grave of Lt. James Hill Holmes, Class of 1915, recipient of the Distinguished Service Cross, killed in action at the battle of Soissons. ✧

Steven V. Smith. Born in El Paso, Texas, Major Smith graduated from The Citadel in 1984 with a BA in Political Science and received a commission as a Field Artillery Officer. Major Smith has a Masters in American History, is a member of the Society for Military History, the South Carolina Historical Society, and a member of Phi Alpha Theta, National History Honor Society. Regarded by many on campus as The Citadel’s “unofficial” historian he has written many articles for the school paper, Alumni News, and made presentations to alumni groups on little known or forgotten Citadel history, traditions, and customs. Major Smith is a founding member of the board of The Citadel Memorial Europe Foundation.