Born on April 21, 1924, in Colleton County, South Carolina, to Pauline and Charles Witsell, Charles, Jr., grew up on Hampton Street in Walterboro. His father was a 1921 graduate of The Citadel. He attended the public schools of Walterboro. After graduating from Walterboro High School in 1941, he attended the Porter Military Academy for one year before entering The Citadel at the beginning of the 1942-43 academic year with the Class of 1946. He was a Cadet Private Fourth Class in Company M of the South Carolina Corps of Cadets. 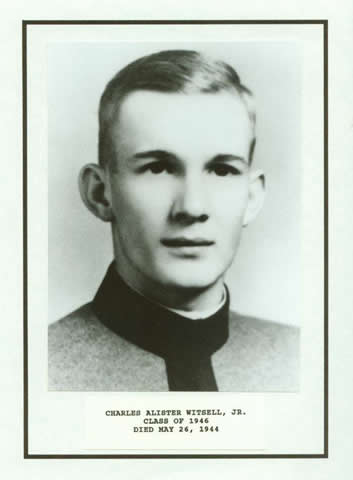 Charles enlisted in the service on July 30, 1943 at Fort Jackson. Originally volunteering for the Army Air Corps, he was rejected because of defective vision. In August, 1943, he volunteered for infantry service, and received his basic training at Anniston, Alabama. He was sent overseas, first to Africa, then to the Anzio beachhead. He served overseas for several months in the medical corps prior to his death. He was attached to an infantry unit while taking part in the drive on Rome, Italy. On May 26, 1944, he was killed in action between Anzio and Rome.

Private Witsell was buried at the U.S. Military Cemetery at Nettuno, Italy. After the war, Charles’ body was repatriated to the United States aboard the transport SS Carroll Victory. On Wednesday, September 1, 1948, he was laid to rest at Live Oak Cemetery in Walterboro. He was survived by his parents, a brother, John Mitchell Witsell, III,; a sister, Constance Witsell Simmons, and his grandmother, Emma J. Witsell, all of Walterboro.