Remembering those who gave all on the 70th Anniversary of D-Day, Dutch veterans pay their respects. On, the 6th of June, 2014, these Dutch veterans made a special trip to the Normandy American Cemetery to place a white rose, on the behalf of The Citadel Memorial Europe, at the six graves and one name on the Wall of the Missing of the Citadel men there. The day after, one of the group stated, “We did it with great honor and respect. Yesterday, we had a great day.”

My favorite story resulting from the work of The Citadel Memorial Europe over the past five years took place back in June 2014. Probably it is my favorite because it is a tale of action, simple in execution but not without risk, and it is a perfect example of the remarkable character of the Dutch veterans I have come to know and respect. 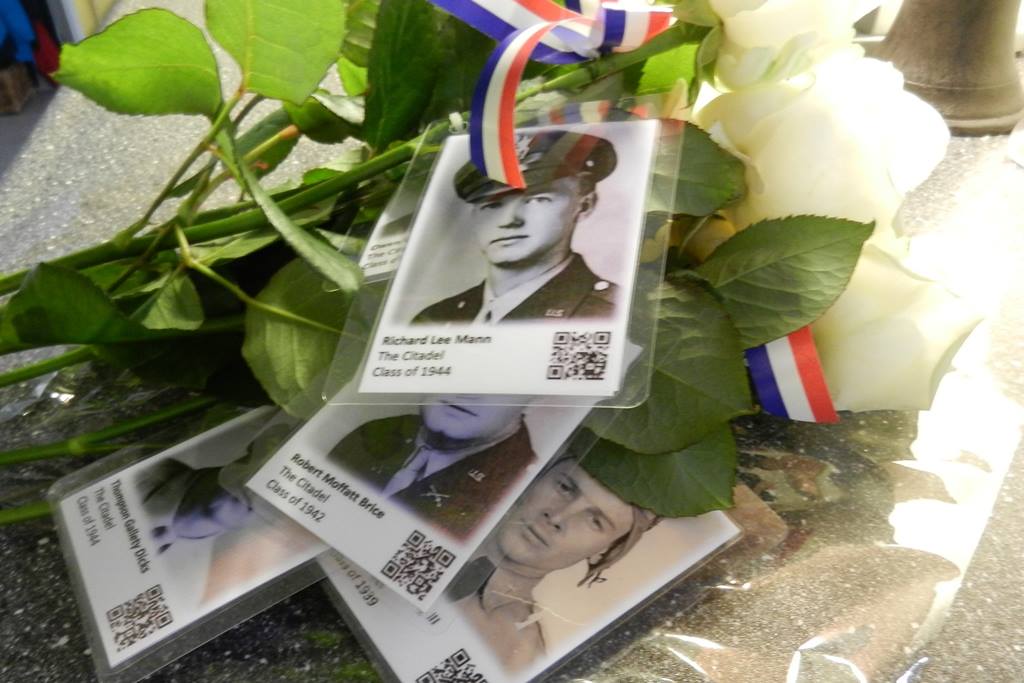 Three years ago, the 70th anniversary of the D-Day landings at Normandy was commemorated with great anticipation and celebration. The preparations by the French people took years. The leaders of the WWII allies were present, the news coverage was complete, and the invasion of veterans, politicians, and celebrants overwhelming.

For me, the story began a year before when chatting with a Dutch friend of mine, Job Kosterman, I learned that he and a group of his mates, all Dutch military veterans, were planning a trip to Normandy for the 70th anniversary. 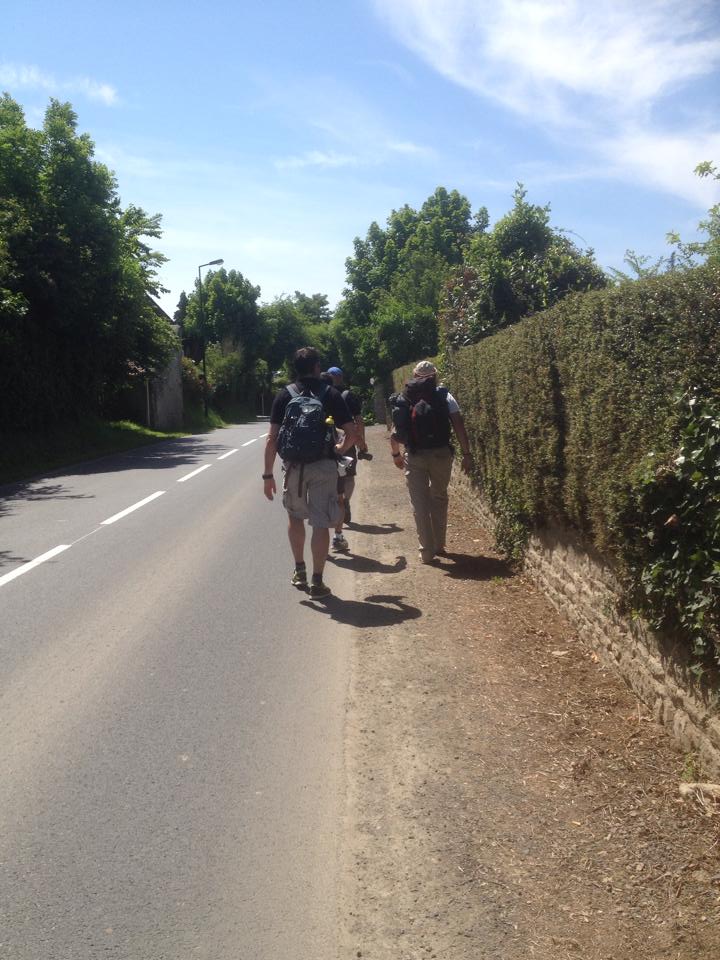 Of course, in addition to sending him the link to this memorial website, I offered whatever help I could in the planning phase warning him to make reservations quickly as surely the area would be an invasion zone once again. Over the following months, whenever we ran into each other, I always asked how his plans were coming along. Job and his group were really excited about their impending trip. 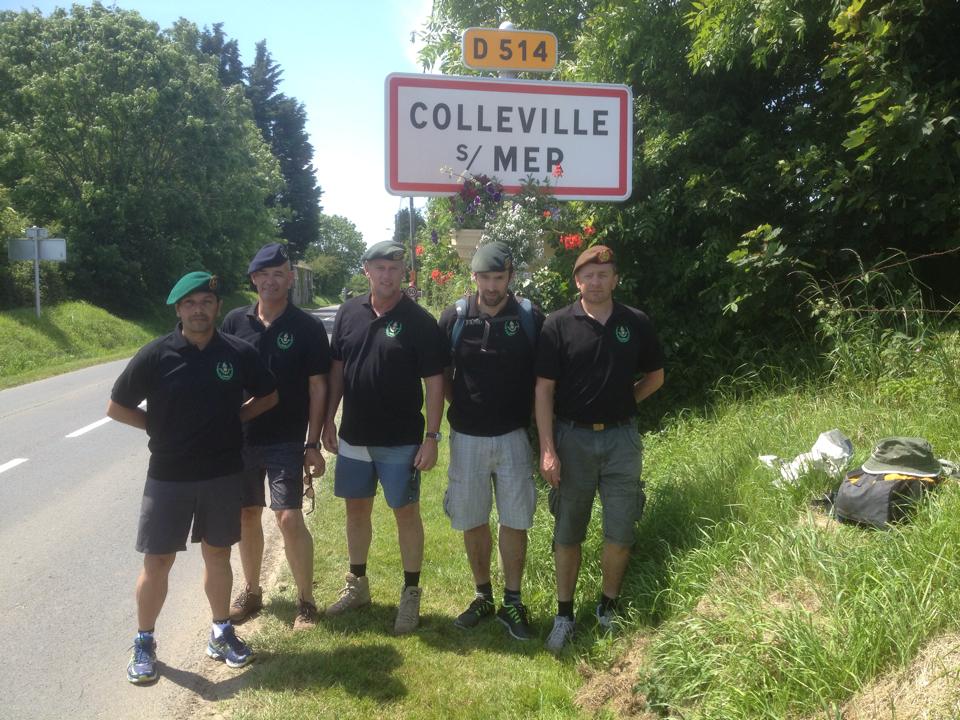 At that time, one thing I could not get out of my own head was the need to remember the Citadel men at Normandy American Cemetery and raise awareness of their sacrifices. I wanted to go there and place flowers, but, as June neared, I found myself having to come to grips with the reality there would be no way I would make the trip. 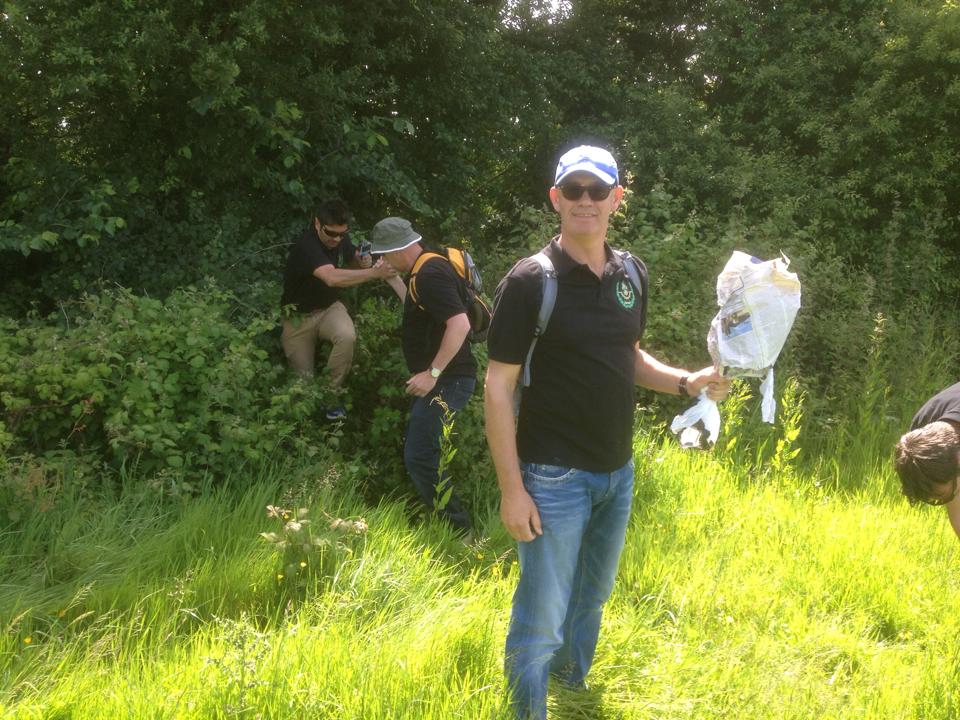 Fortunately, I had an alternative. I asked Job if he and his mates would take flowers with them and place them at the cemetery. The immediate response was “Yes!”. The morning of their departure for Normandy, I was up early preparing white roses and laminated photos cards. I then headed over to Job’s to hand them over and wish him a safe trip. 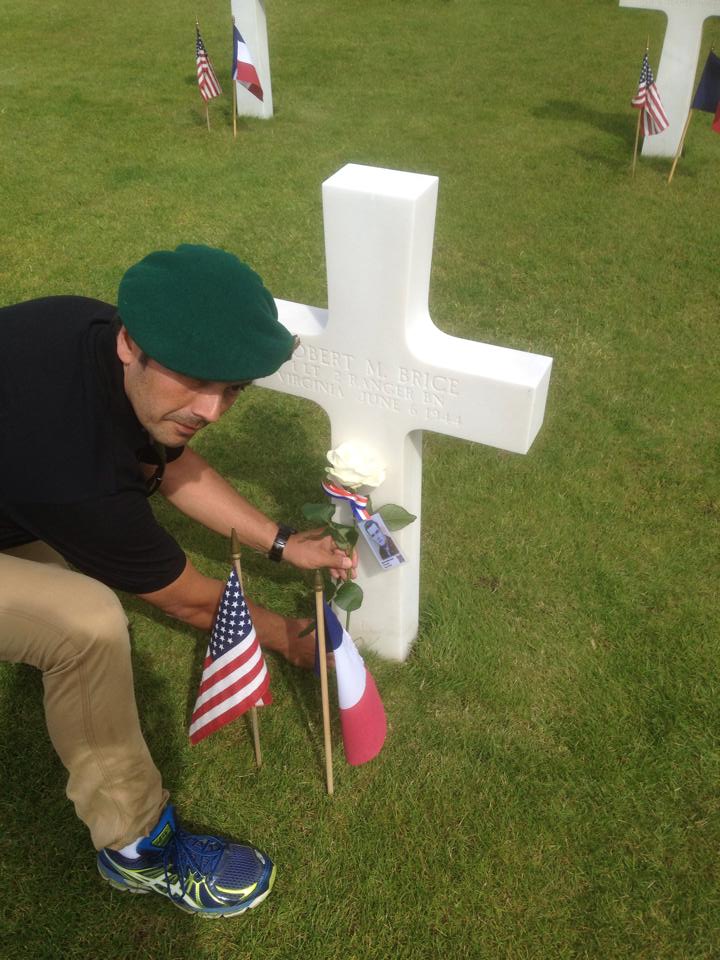 “It was a great honor to give a little thing in return for the men who gave everything.”
– Job Kosterman, Dutch veteran 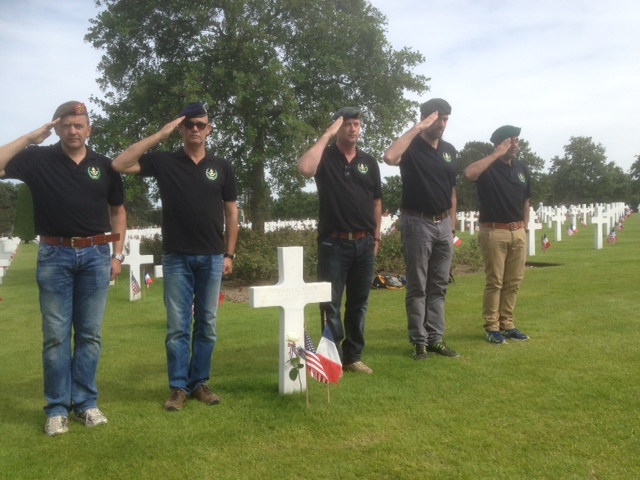 In the early hours of June 6th, all roads within a 20km radius were reconfigured to only lead into Normandy American Cemetery. This would then be reversed after the official ceremony was over to facilitate the safe and speedy departure of all the VIPs. The cemetery itself would not be opened to the public until after all the guests departed, broadcast equipment packed away, and  operations could revert back to normal. 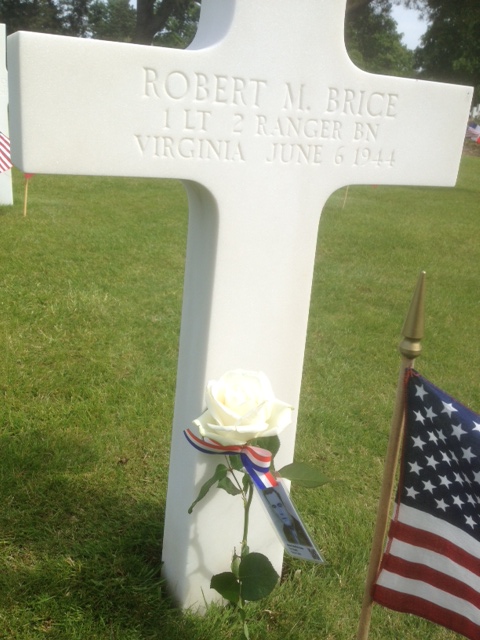 In the heat of the day, the Dutch veterans made their way to the cemetery on foot. After a hike of several kilometers, they arrived at the front gates where a crowd was congregating, waiting for the public to once again be given access to the most famous overseas American cemetery. Many had been waiting hours. Several persons became quite loud and obnoxious, yelling at the security guards. 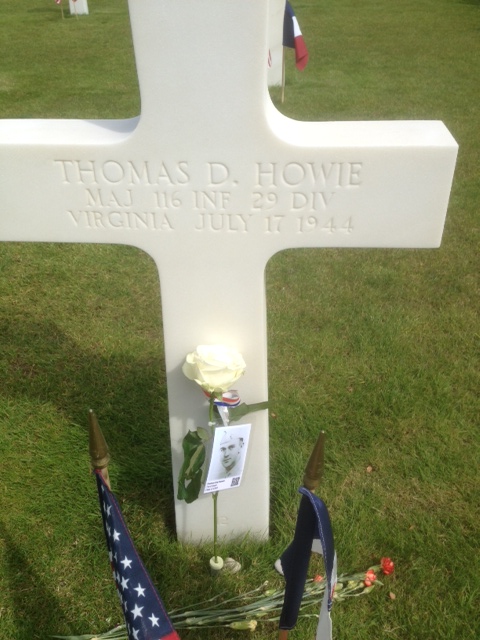 The Dutch were not ones to wait around. They would not be held from their objective. It was then, seeing the guards distracted, that the Dutch set off to find a breach in the fence around the backside of the cemetery. They found a passage through the bocage, fought their way through the brambles, and stepped out onto the still, serene expanse of green upon which 9, 387 white crosses and Star of Davids reflected the brilliant June sun against the hazy sky. 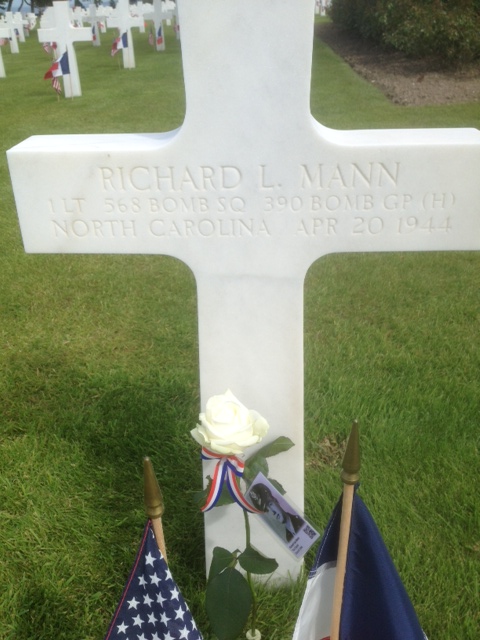 They set about their business visiting the six graves, paying their respects, and rendering honors while keeping a vigilant watch for anyone who may not appreciate their deed. They finished at the name of Allard “Dusty” Heyward, ’31, on the Wall of the Missing.

Shortly thereafter, I received photographs from Job along with a short text, “Mission Accomplished”.

The next day, I received another message from Job. They were visiting Pointe du Hoc and made a terrific discovery. Outside of the new visitor center was a plaque with the story of Bob Brice, ’42. The plaque reads… 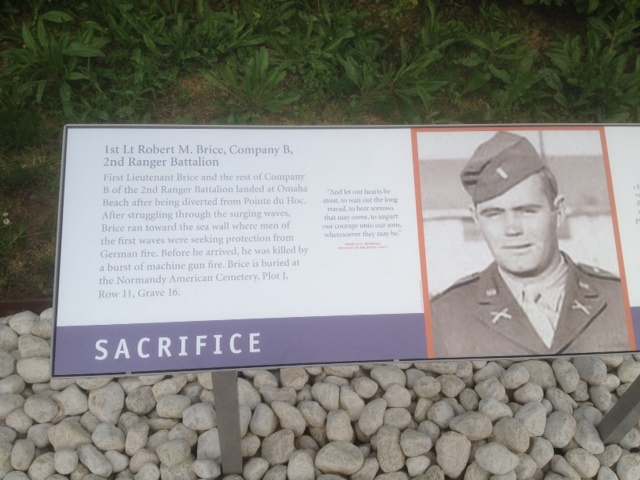 1st Lt. Robert M. Brice, Company B, 2nd Ranger Battalion
First Lieutenant Brice and the rest of Company B of the 2nd Ranger Battalion landed at Omaha Beach after being diverted from Pointe du Hoc. After struggling through the surging waves, Brice ran toward the sea wall where men of the first waves were seeking protection from German fire. Before he arrived, he was killed by a burst of machine gun fire. Brice is buried at the Normandy American Cemetery, Plot I, Row 11, Grave 16.

A week later, upon his arrival back home, Job shared with me all the glorious details of their unforgettable adventure where they met D-Day veterans, shared a drink or two, listened to their stories, watched parades, walked the beaches, and “jumped a fence” to lay flowers on Citadel men’s graves.

A sincere thanks to our Allies for making this happen. Brothers in Arms. Salute.