LIFE AT THE CITADEL

This is another in a series of articles on Life on the Campus at our leading schools and colleges. By ELEANOR NANGLE

FOR THE last week more than 200 first classmen at the Citadel, the Military College of South Carolina at Charleston, have been approaching, with a reluctance they wouldn’t have believed possible four years ago, the most eagerly anticipated event of their lives. As seniors they have led the corps for the last time. They have formed in the reviewing stand to receive the last parade. Yesterday they were graduated.

Today they are scattering to their homes in all parts of the country, most of them pausing only briefly before they enter the armed services. But something of them remains at the Citadel, adding in large or small measure to the vast stores of cadet tales and traditions there. And the spirit of the Citadel goes with them. In the life of all Citadel men the thread of Citadel memories is one of the most colorful, durable, and treasured in its whole tapestry. 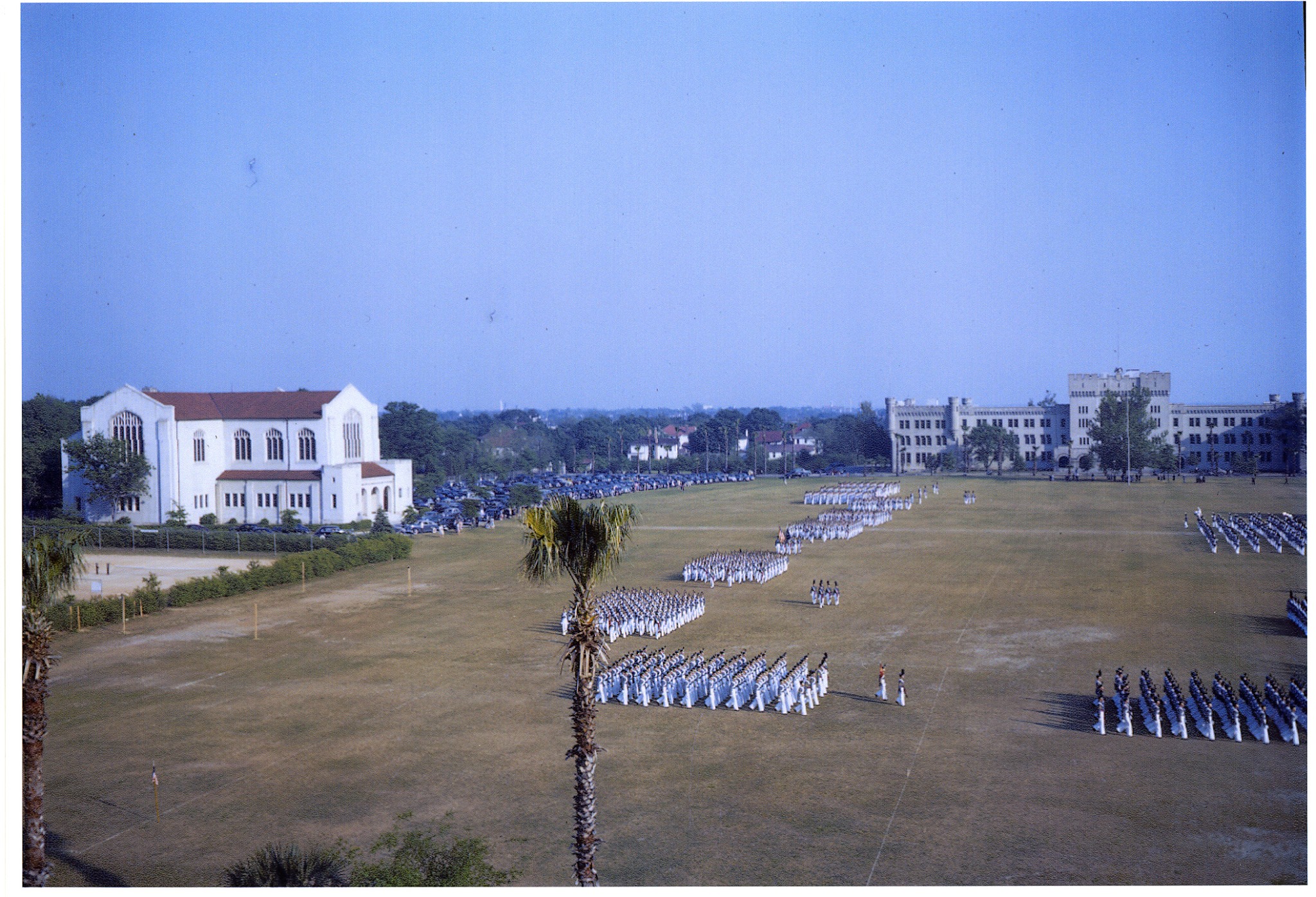 The Citadel man has absorbed more than rigorous training of mind, body, and spirit, and when he reviews them, as all graduating cadets do on commencement day, he places new value on other gifts of the school to the student – the Spartan discipline, the good counsel, the friendships, the democracy, the pageantry of patriotism and the essence of it.

Over and above these the cadets will remember all sorts of things.

They will remember the example and training and friendship of the Citadel president, Gen. Charles P. Summerall, U.S.A., retired, who has added to his laurels as commander of the 1st division in World War I, and later as chief of staff of the U.S. army by guiding their college to the greatest and most vigorous era of its long history.

They’ll remember daily prayers and the Sunday morning services at the cadet chapel, when they and their gray-clad companions marched smartly across the parade grounds to pass beneath the entrance inscription, “Remember Now Thy Creator in the Days of Thy Youth.” They’ll think often of the glorious stained glass windows there in memory of Citadel men, and of the tablet in the vestibule inscribed to the “Blessed Mothers of All Citadel Men.” They’ll remember the moving moment at each service when the cadets, 1,600 strong, stand rigid while the colors of their country and their college are brought forward to the altar.

See also: I wear the ring

They’ll remember the senior hop in the Citadel armory, with its “no-break,” when all but first classmen are barred from the floor and no friend or enemy dare cut in. They’ll remember grits for breakfast in the mess hall, and the beautiful shadows of the moonlight thru the thousands of Moorish arches in the barrack courts.

They’ll remember walking tours in punishment for their pranks, and that they were in parades without number but never go to see one.

They’ll remember Parents’ day, with its full-dress parade, and General Summerall’s birthday, when the band and the entire corps assembles on his lawn before the first mess. And that on one of his birthdays he reversed the usual procedure by giving them a present of two sailboats.

They’ll remember a curious cadets language in which a roomate is a “wife” and the girl of their dreams is “O.A.O.,” meaning “one and only” or “off and on,” depending on the course of true love. They’ll look back fondly on their freshman days, when they were freely “braced” by upperclassmen and made to square gallery corners. They’ll remember daily calisthenics, the cokes they consumed in the canteen, and if they were officers, being ducked in the showers after announcement to the corps of their appointment. They’ll remember going down the receiving line at college parties, and strolling on the “Avenue of Remembrance” that stretches before the three (shortly to be four) barracks, each tall palm tree placed there, in memory of a Citadel man who died in the last war.

They’ll remember that in this, their final year at the Citadel, they drilled without rifles or bayonets, since these were turned over to the army for sterner purposes. They’ll remember the United States planes that almost daily dipped over the college grounds in salute to future brothers in the battle. It’s against regulations, but it happens, and the cadets, if they’re at liberty, respond with wild waves that mean “We’re coming.”

They’ll remember, too, that the military record of the Citadel is a heritage that carries obligation as well as inspiration. Citadel cadets fired the first hostile shots of the Civil war. They are also credited with firing the last shot east of the Mississippi in that struggle. The gray battle streamers of the Confederate States army is carried now on the pike of their regimental colors. Citadel men have since served with distinction in every conflict in which this country has engaged.

Today the Citadel senior, trained for both civil and military life, is willingly foregoing the former, determined that the nation’s history of victory and the Citadel cadets’ of valor must repeat itself.